So Far from Home, So Near Where I Live

A collection of short stories about family – and perhaps primarily about men. Men about to become fathers, men who are fathers, and men who have been fathers.

Ski jumper Frithjof ‘Daredevil’ Prydz and rock ‘n’ roll wild guy Jerry Lee ‘The Killer’ Lewis. Might they have anything in common? Certainly – when they’re both about to bury their fathers, they have everything in common.

Sailor Mikael Halvorsen has left a part of his body on every continent except Australia. Now he needs his son’s help to give away his heart – to the woman he was married to a quarter of a century ago.

The first thing communist Elias Kamphaug did when traffic lights came to Kongsvinger was to run the red light. He’s continued to do so, and now his only son is all grown up – and struggling with being just as righteous as his father.

Daniel Kristiansen is angry at God, and takes part in his first bike race in memory of his wife and daughter. But will he make it to the finish line – and is this even what he wants?

Few can set the mood, get us cheering on the underdog and being thankful for everyday life with such simple tools as Levi Henriksen can [...] For the reader, what is perhaps most moving of all is that the texts appear so honest, unaffected and sincere.
5 out of 6 stars

Levi at his most typical – and best [...] in the top tier of Norwegian novelists.
5 out of 6 stars

[He] writes up to the threshold for sentimentality, with intense emotions and somewhat lofty words, but he’s in control and often balances it with a shot of humour and situational comedy, while the language itself is so musical, simple and straightforward that for the most part, one forgives him.

Levi Henriksen defends his role as the literary king of Christmas.
Klassekampen

At his best there is a particular tenderness and warmth throughout Levi Henriksen, with a cast of characters one can believe in.

In Iron & Metal, Henriksen has his usual strong moments as a wordsmith: “The blows that don’t arrive are always worse than those that do,” he writes at one point, and one instantly recognises the insight in it.

Magnificent penmanship [...] In this country we would probably have to go all the way back to 1885 and Amalie Skram’s novella Karens jul to find a Christmas tale of the same calibre as Levi Henriksen’s Christmas stories. 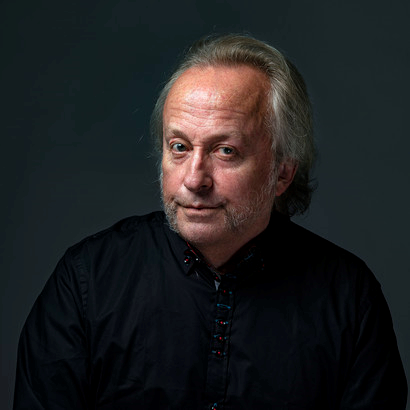 Levi Henriksen (b. 1964) is an award-winning author of short stories and novels, and enjoys a wide and loyal readership. For many years he worked as a journalist at a local newspaper in Kongsvinger before he became a full-time author. He also plays bass in his own band, writing song lyrics and composing music. Henriksen’s trademark is his capacity to combine a strong – and at times even aggressive – masculine voice with vulnerability. His works are mainly set in a tough, unsentimental and rural environment, which sits uncomfortably on the fringes of contemporary urban life.