The world cannot be trusted. Politics is unrecognisable; the terrain no longer matches the map. Take a step up into thin air – the stairs are suddenly no longer there. Find yourself on the cusp of sleep, only to suddenly jerk back to consciousness. These are vexations.

In the six stories in Jan Grue’s new short story collection, metaphors become reality, while reality is distorted by technological developments – and an omnipresent, existential uncertainty. In Vexations, the author once again proves himself to be a sharp-eyed and perceptive observer of social interactions and modern lives.

…writes with a cracking force and mighty intellect. […] There are infinite ‘Vexations’ in this dazzling short story collection.
5 out of 6 stars

Grue trades well in the art of the short story; it can be unpleasant and painful, like walking with a stone in your shoe.
5 out of 6 stars

Jan Grue’s short stories dig out the disquiet wherever it is to be found – everywhere.

Vexations reveals a playful author with a sense for the irrational and disturbing in life. Moreover, in his fifth collection of short stories, Jan Grue writes keenly and revealingly about pregnancy and the postpartum period. 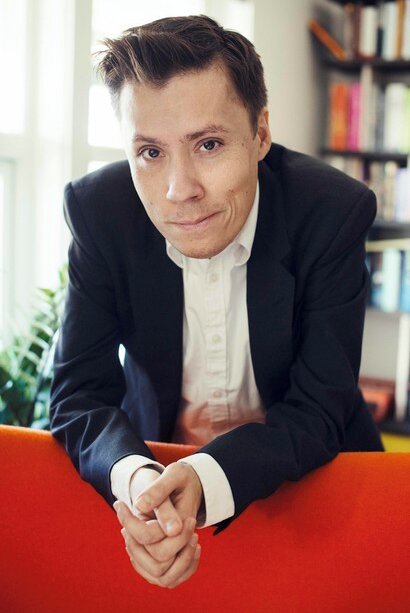 Jan Grue is the author of a wide-ranging body of work in fiction, non- fiction, and children’s literature. He made his debut with the short story collection Everything Under Control (2010).

He has since published a further four short story collections, the latest of which is Vexations (2019). His first novel, The Best of All Possible Worlds, came out in 2016. Among Grue’s works for children is Oliver (2012), a fantastical story about living wheelchairs. He has also written several academic books.

His book of autobiographical non-fiction, I Live a Life Like Yours, was published in 2018 and went on to win the Literary Critics’ Award and has been nominated to the Nordic Council’s Literature Prize – as the first Norwegian non-fiction book in 50 years.

Jan Grue was born in 1981 in Oslo. He holds a PhD in Linguistics and is Professor of Qualitative Research at the University of Oslo.