Liv Eriksson is a psychologist and has worked in some of the world’s toughest emergencies. But when her boyfriend Olav falls to his death while they are mountain climbing in Thailand, she breaks down and isolates herself.

Olav was a researcher in Norway’s central police unit for economic crime and an outstanding computer specialist. Someone has posted a clip of his death fall on the internet. Liv realizes that someone out there knows what really happened when Olav died – and sets out to find them. She soon realizes that Olav had secrets that neither she nor his colleagues knew about. She makes discoveries that cause her to question: did she really know Olav?

The turmoil grows into an obsession. Liv’s pursuit of the truth takes her on a journey – to Munich, Cyprus, Beirut – which becomes increasingly dangerous as she approaches the truth about a finance operation of spectacular dimensions.

The countdown has started for what is to become an unprecedented crime. 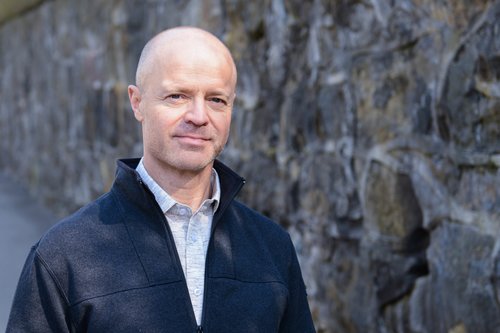 Sven G. Simonsen (b. 1965) is a Norwegian author, journalist, political scientist, and aid worker – with emphasis shifting between those areas depending on urges and opportunities.

He has worked as a researcher at PRIO (Peace Research Institute Oslo) and has been on assignment for UNICEF in countries such as Yemen, Kyrgyzstan and Sudan. In his spare time, Sven is an avid climber and he competes in powerlifting. Risk is his thriller debut.