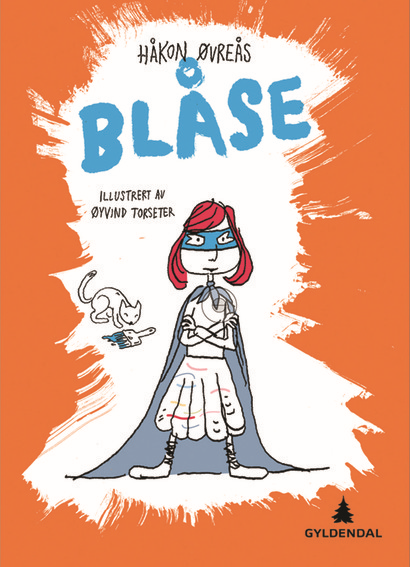 Our heroes are finally back! Here is the third volume about the three friends who become superheroes to make the world a better place. The first book in the series was awarded the prestigious Nordic Council Children and Young People’s Literature Prize.
In the third book of the series, the super-rich tycoon Tom Hane comes to the village to establish the world’s biggest chicken farm. But there’s a problem: Tom wants to build the farm right over our heroes’ cabin. There another problem: Åse’s dad just lost his job. As usual, only superheroes will be able to set things right—but will it prove too much for the gang this time?

This sequel is golden.

The clever style of the illustrator, Øyvind Torseter, is a perfect match to the story, and adds a humoristic dimention to the text. A charming universe everyone should be allowed to step into.

As with previous books, Øvreås adds a touch of magic. With this, he creates a realistic, transcendental and challenging universe for young readers. It is a goldmine. Sit tight and wait for the next book in this heartfelt series, rich in understated humor and warmth on behalf of human vulnerability.

The author has spun a creative web for everything to fall in place. The text is covered with clues, which makes it possible for an alert reader to sort out some riddles even before the heroes do. And when everything falls into place, because they do, there is still room for wonder and surprises.

This is a political book as politics reveals itself for kids aged 6-9. The world is not fair! And for justice to be served, a battle must be fought.

He has previously published three books of poetry. Brown (2013) was his first children’s book and received several award for. He was also nominated for the Brage Prize for Children and Young Adults 2013. The translation rights of Brown is sold to 30 languages.

Øyvind Torseter (b. 1972) made his debut as an illustrator in 1999 and illustrates his own texts as well as other authors’ texts. He has received The Ministry of Education’s Prize several times and has also been awarded the international children’s book prize Bologna Ragazzi. He won the Nordic Council Prize together with Håkon Øvreås for Brown.