This is the story of the world’s most popular fox, Ayla, who became a worldwide celebrity with almost a hundred thousand followers online. Video clips about her have been viewed close to 100 million times, and along with her owner Silje Elin Matninsdal, she’s appeared in numerous media channels all over the world. It’s not only the adorable Ayla people have taken to, but also the captivating story of the close bond between a fox cub and it’s human mother. A story that started so beautifully, but ended so tragically.
In this book we follow Ayla through her first and only year, from the moment she was rescued from a fur farm, as a cub – until her disappearance one year later. The whole world followed the search operation intensely for several weeks, until Ayla was unfortunately found dead.
We get close to Ayla and her headstrong and playful little character, with feral instincts which could never be tamed; her many strange antics are maybe a reflection of precisely that. In Ayla the Fox you can read about the amazing and idyllic life Ayla lived with her adoptive human-mom Silje. The alternative; captivity on a fur farm, doesn’t bear thinking about.
Ayla now lives on through many memories and fantastic photographs, in this enchanting story of Ayla the Fox.

I WANT THE MOUNTAIN ALL TO MYSELF. I LIKE WALKING ALONE, THAT’S WHY I CHOSE A FOX 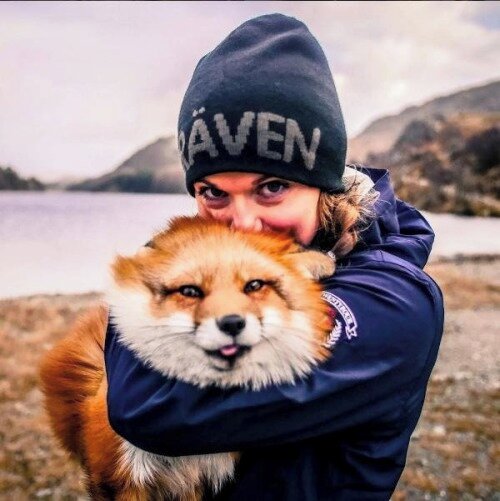 Silje Elin Matnisdal was born in 1982 and comes from Brusand in Jæren. She has grown up on a farm and has always had an inherent and strong relationship with animals. You see this in her photos.
Leiv Magnus Grøtte was born in 1954 and lives in Stavanger. He is originally a teacher, but has worked as a tourism manager, and has been a copywriter in the advertising industry for 25 years.