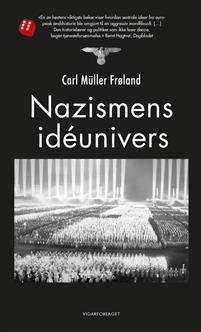 More than 70 years after the fall of Nazi Germany, the question remains unanswered: How could a leading European nation with an impressive culture develop a violent dictatorship that unleashed a new world war and committed an industrial genocide? What was Nazism - and why did the Nazis act in the way they did?

Nazism did not arise in a historical vacuum, but had deep roots in German culture. From German Romanticism sprang ideas which had great importance for the genesis of Nazism. There arose conceptions of the individual as only a part of the national collective, and of the world as consisting of limitless struggle between opposing forces. This books shows how several currents of thought, like Völkisch Holism and irrationalist Lebensphilosophie, arise and contribute to the emergence of Nazi ideology.

The book throws light on central characteristics of Nazi ideology: ultranationalism and leader-worship, racial theory and antisemitism, totalitarianism and glorification of violence. Additionally, the text deals with the strong element of occultism in Nazism, and gives us insight into the psychological effect of Nazi ideology – how Nazi ideals and attitudes made individuals embrace the Hitler regime wholeheartedly. This is a dramatic tale of fanatical passion and boundary-transcending violence – the story of how a “political religion” is born and acquires such power over men’s minds that people are motivated to the most drastic actions culminating with the Holocaust.

It is with excitement that I have read Carl Müller Frøland’s book 'Nazismens idéunivers'. I am excited because it is so liberating to see a young academic embark on a project of such scope — and succeed with it.

One of the most important books this autumn. 6/6

Undoubtedly, this debut book is a masterpiece in many ways, and will stand for a long time as a text which is hard to ignore.

Ideas that one could solve social problems by exterminating certain groups of people existed long before 1940. In this context, Carl Müller Frøland's 'Nazismens idéunivers' can also be recommended.

Pieces about Nazism as religion of nature, about the Führer cult as shaman adoration, and the SS as prime example are places where the author is in his element. ... dramatic historical brushstrokes ... great colour illustrations.

very informative ... it contains almost everyhting which somehow can be called proto-Nazi or Nazi ideas, from the conception of art over the legal and social to the political as well as the agrarian and the tactical.

A unique account of Nazism from the perspective of the Nazis themselves — a monstrous project through the monster’s eyes. … In our time of deep political divisions and the strengthening of extremisms on both sides of the socio-political spectrum, this book is more topical than ever.

recommended for specialists and would be ideal as a graduate-level text. ... effectively providing new insight and conceptual ways of thinking ... For those interested in an objective, unbiased view of the historical roots of Nazism, the author has provided a valuable service.

brilliant … masterfully maneuvering through extensive literature and hitherto lesser-known theoretical paths … a major guide to understanding a dark epoch, which speaks not only of what was, but also of what can easily be repeated.

Frøland ... wrote a book about an ideology that is probably the most elaborated topic in world literature, but he did it in a completely innovative way. ... It is precisely this relativisation of evil that makes this book so topical; hardly anything more important can be found at this moment.

It is an impressive intellectual work that the author has accomplished.

It is a valuable addition to the historiography of Nazi Germany, one that nicely bridges the gap between Nazism as an ideology and Nazism in practice and as policy. ... Recommended.

Many readers have an idea of the racial thought that lay behind the Holocaust. However, this book by the Norwegian intellectual historian Carl Müller Frøland should cover another knowledge gap, namely those thoughts and that worldview that lay like a web beneath the political conceptions.

'there are few examples of this sort of analysis. ... The beauty of this approach is that it is comprehensive and coherent ... excellent ... a fresh and valuable point of view ... he [Frøland] really has helped the reader ... better understand the essence of Nazi ideology.'

I wholly recommend this as a textbook better to understand how such ideologies can be created, and also as a good example of how the past can affect the future in myriad ways

The theoretical breadth and the author's wide reading are one of the book's strengths ... Mostly Frøland writes elegantly and pedagogically.

The last quarter of a century has witnessed an avalanche of studies on Nazi Germany … The last three years alone have seen the publication of several major works such as ... and Carl Müller Frøland’s Understanding Nazi Ideology: The Genesis and Impact of a Political Faith (2020).

Frøland shows clearly and in detail how Hitler's ideology of hatred did not arise in a vacuum but as a result of racist and antiliberal contemporary currents.

We have tended to think that Nazism is just barbarism, brutality and idiocy. Therefore, we have not looked at the ideology that carried it forth. ... Frøland gives a valuable contribution

... essential features of Nazism were parts of German thought that developed during the 19th century, before Nazism emerged as a distinctive ideology. Good texts about this are Frøland's Nazismens ideunivers ... and George Mosse, The Crisis of German Ideology.

Carl Müller Frøland (1982 - ) has an MA in Intellectual History from the University of Oslo. He is working on a PhD thesis about religious and secular aspects of the Nazi worldview. 'The Nazi Universe' is his first book.