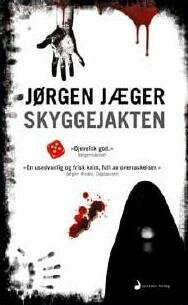 Many of the inhabitors in Fjellberghavn are envious of the fortune Ingolf Holgersen has managed to build up through his life, and many find him both cold and arrogant. What they don’t know is that he has been diagnosed as a paranoid schizophrenic, and therefore at times feels like he is pursued by everything and
everyone.
When Holgersen calls his son Cato to tell him someone has been shooting at him, Cato thinks that his father has fallen ill again. The family doesn’t take Holgersens concerns serious, they have heard similar stories too many times. And step by step Holgersen is driven into the disease.
When disaster strikes, Sheriff Ole Vik starts a thorough investigation. But he finds no traces or clues to the mysterious attacker. The case is about to be closed when very unusual
information suddenly appears...

Chasing Shadows is the first book about Sheriff Ole Vik.

Jørgen Jæger sold one book every forth minute last year,
making him one of Norway's most sold crime authors. His
books are sold to several countries: Sweden, Denmark,
Poland, Russia, Finland and Spain. He has also been
nominated to the prestigious Norwegian Bookseller award
four times.