For every hero there were thousands of losers .... sorry, dreamers who never made the cut. These are their stories.

SideQuest is about four amateur adventurers who dream of going on legendary quests ... but find themselves struggling with soul crushing day jobs, time management, relationships, overdue bills, expectations of their families and society, social inequalities and the creeping suspicion that the dream they are chasing is just that - a dream.

The SideQuest-series is a reflection of our own times, set in a medieval fantasy setting. Every book is a new, stand-alone adventure that didn’t quite go as planned or qualify for the books og legend.

Vigdus’ life didn’t turn out the way she expected, as she stares out the window of her dreary office at Midgard municipality on her 35th birthday.

But she breaks out of her funk and quits her job, to pursue her dream of becoming an adventurer! Despite the misgivings of her parents and society itself.

Vigdus gathers a crew of amateur adventurers: a pacifist bard, a crusader with weight issues and an alcoholic alchemist. Together, they embark on their first quest.

And together, they come to realize that real adventures don’t work like they do in the legends, as they get their asses kicked by teenage deliquents, confront the far-right thugs in Sons of Odin and forget to read the fine print in the quest posters.

The SideQuest-series is a reflection of our own times, set in a medieval fantasy setting. 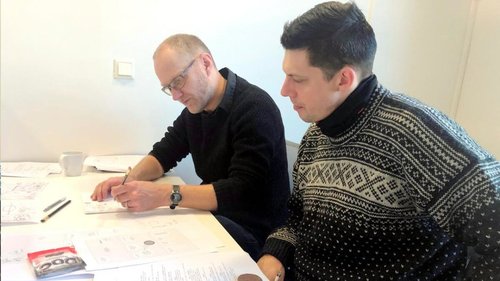 Ronny Haugeland (born 1976) is an award winning Norwegian cartoonist, accomplished voice over actor and bingo host, who lives with his girlfriend and his dog who has a tendency to sneak into his comics.