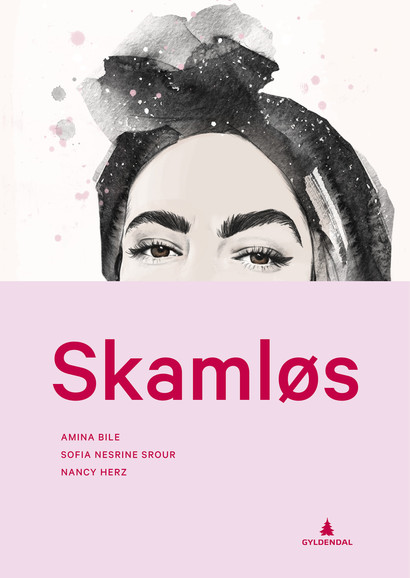 Nancy Herz, Sofia Nesrine Srour and Amina Bile have over the past year collected stories from girls who have personally experienced negative social control. In Shameless they discuss what it feels like to be constantly limited, corrected and shamed, and they share their own experiences on their way towards shamelessness. And their best hijab hacks.
Herz, Srour and Bile started the movement which in the media is referred to as ‘The shameless girls’, and which really put negative social control on the agenda. For their work for freedom of speech they have, among other things, received the award Fritt Ords Honnør (2017).

I hope this book is contagious. I hope the shamlessness spreads … Everyone should read this book, either to be inspired to fight for their own cause or to understand others.

[The shameless girls] challenge the patriarchy and the honor codex, without judging. And even if the Muslim women are the main audience of this book, it is relevant for anyyone who wants to understand the issues and work for a multi-cultural society.
5 out of 6 stars

SHAMELESS assaults the great cultural conflicts of our time armed with knowledge, openness, devilish recklessness and a great deal of humour. A chant rings through the Norwegian society that is not likely to die down shortly.

I am so enthusiastic about SHAMELESS that I can’t get my hands down. They want to be up there in the air applauding.

SHAMELESS is an amazing and powerful work, a future candidate for the Norwegian feminist canon.

Amina Bile (b. 1998) is involved in politics. She’s shameless, but harmless. Nancy Herz (b. 1996) is a Norwegian-Lebanese an activist, booklover, daydreamer and writer. Sofia Nserine Srour (b. 1994) is a Norwegian-Lebanese Muslim who debates a lot and thinks even more. Bile, Herz and Srour are all feminists and profiled voices in the public debate.