The counterfeiter in sachsenhausen 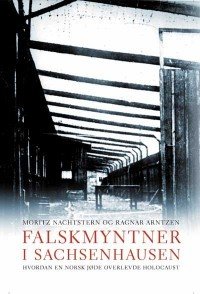 This book tells the story of the most fantastic forgery in history.

In 1940 the Nazis set a secret project in motion. From the rows of men on their way into the gas chambers, typographers and printers were selected. These were transferred to the strictly isolated Block 19 in Sachsenhausen. The prisoners were presented with an enormous task: They were to produce counterfeit British notes to the value of hundreds of millions of pounds. The notes were to be dropped from planes over London, with the aim of crushing the world economy.

One of the typographers was a young Jewish boy from Oslo, Moritz Nachtstern. Here he shares his shocking tale, but also the intense excitement involved: They had to produce exquisite forgeries, but not so fast as to render their task redundant…

This book was first published in 1949, written in collaboration with the journalist Ragnar Arntzen. This new edition is richly illustrated and includes a large number of rare photographs and facsimiles. Foreword by the daughter of Moritz Nachtstern, Sidsel Nachtstern. Afterword by the historian Bjarte Bruland.

“The most detailed and reliable of the memoirs from the greatest counterfeit in history” (Lawrence Malkin, author of Krueger’s Men)

Moritz Nachtstern, stereotypographer, was one of many Norwegian Jews sent to Germany in 1942. From 1943 to 1945 he was a prisoner in Sachsenhausen. He managed to escape during the last days of the war.