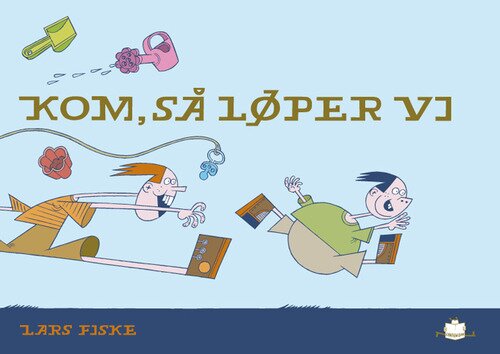 A fast-paced story told in pictures about two unruly boys who can’t sit still, but at wild speed run through a number of fun situations, while the line of persecutors is getting longer and longer.

Come on, let’s run was awarded the prize for the Best picture book of the Ministry of Education, it was also voted the Book of the Year and rewarded with gold in the category picture books in "The Most Beautiful Books of the Year». A Norwegian classic that we have recently reprinted.

A companion book to Lars Fiske's Full speed with grandfather. The two books have the same format and aesthetics.

Lars Fiske was educated as an illustrator and graphic designer at Konstfack in Stockholm, and Otis Parsons in Los Angeles, 1988-92.

Fiske has published several comicbooks and children’s books, and has done illustrations for many of the largest newspapers in Norway and Sweden as well as public space commissioned artworks in Norway.

His work is widely exhibited and collected by several galleries and institutions.
He has also won numerous awards for his work, Grosz was awarded Årets Tegneserie/ Comic Book of the year 2017.