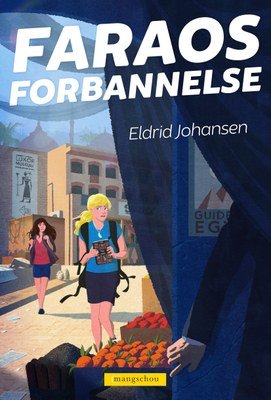 An exciting mystery from Egypt!
Mathilde and Susanne are ready to enjoy the sun as tourists by the swimming pool in Luxor. In Egypt pharaoh’s temples and hidden graves are waiting as well, and they want to discover the ruins where Mathilde’s mom died many years ago.
But even though the sun is shining, Mathilde’s anxiety grows. What do the mysterious signs from her nightmares mean? Why does she feel like someone’s watching them? And what secrets were her mom about to uncover when she died?
Pharaoh’s Curse is mystery with depth and action, two strong characters – and an ancient female pharaoh! Suitable for readers from 9-12.

The novel was very well received by the critic’s: ”Told in a visual style … Easy to picture as a movie. ..Well-written with accurate and original metaphors.”

”A lot of historical knowledge, a few supernatural touches, a feministic twist and a lot of thrilling tension.”

”There might be many crime mysteries from Egypt, but Eldrid Johansen is able to do something new with the material by using the story of the female pharaoh and her power.”

Eldrid Johansen (b. 1973) has written many books for children and young adults since her debut in 2005. She is cand.philol. from University of Oslo with a thesis on the goddess Nephthys in ancient Egypt religion. Johansen is working as author, artist, actor and producer. For her book How to write a brilliant story, co-written with Steffen Sørum, she was nominated to Brage Non-fiction Prize for Children and YA 2016, and won the Ministry of Culture's Non-fiction Prize for Children and YA 2016.