Who Drew the Mustache on the Painting?
Crow's Nest Kindergarten Mysteries

A couple of kids. The world’s most expensive painting. A marking pen. What can go wrong?

Today Crow’s Nest kindergarten is at the art museum looking at the paintings. They are especially looking forward to seeing The Scream, one of the world’s most famous - and most expensive – paintings. But a crisis arises! Undetected, someone has drawn a red moustache on The Scream.

The guard at the museum is furious! He is absolutely certain that a child from Crow’s Nest kindergarten has drawn the moustache. Leon and Live, Crow's Net’s very own detectives investigate the case. And they come up with a pretty surprising solution to the mystery. 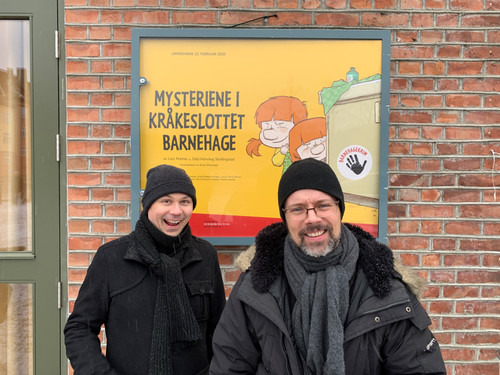 Lars Mæhle (b. 1971) has written several books for children and young people. He debuted in 2002 with the youth novel Keeper for Tunisia which was later
filmed under the title Keeper for Liverpool. (2010). His major breakthrough came in 2009 with the fantasy novel The Land under the Ice, for which he received several
awards, including the Ministry of Culture’s literature award for children’s and young people’s literature. Lars is from Sunndalsøra and currently resides in Oslo.

Odd Henning Skyllingstad (b. 1978) is a cartoonist and illustrator. He is educated in animation at the University College in Volda, and won the Sproing Award
for the series Børre is dead. Skyllingstad was born in Hammerfest, grew up in Vikersund and currently resides in Oslo.