Is there a talent to falling in love?

It’s summer and Simone spends the hot summer days all alone. As she counts down the days until her friends come home from holiday, she meets old Uncle Harry
and her new neighbour, a boy named Aaron. Aaron is the coolest person Simone has ever met, and she gets a weird feeling inside when he smiles at her.

Leah wants Aaron to join her new disco dance group, which is training for this autumn’s big talent competition. But what does Aaron really want? Why does he love to listen to Elvis? And is it true that he had a girl’s name where he lived before?

Rainbow Summer is a warm and important book about friendship and infatuation, card tricks and music - and about daring to be who you are. 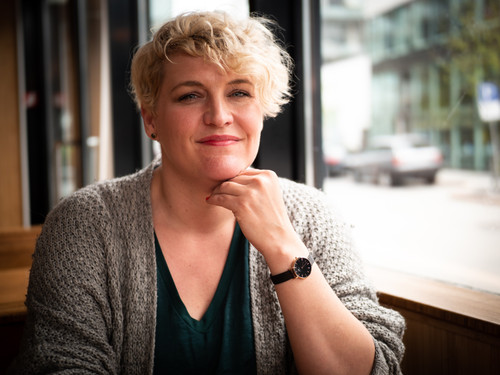 Camilla Otterlei (b. 1980) is an author, teacher and lecturer. She is a member of the NBU (Norwe-gian Writers for Children) and the NFFO (The Norwegian Non-Fiction Writers and Translators As-sociation) and has published a number books in various genres since her debut in 2004. She received Landslaget for Språklig Samling litteraturpris (Literature Award) for the illustrated book The Art of Meeting a Bear (2015). Otterlei is from Kongsberg and lives in Drammen.
Tiril Valeur (b. 1975) is an illustrator and author. In addition to writing her own books, has also illustrated many books for other authors. She is a graduate of Oslo Academy of the Arts.