A fly gets caught up in a school band that is out marching, but all of a sudden there are all sorts of awful noises and people fall out of step. After all, what are a little fly supposed to do if it really wants to play in a brass band where all the instruments are already taken?

This book gives us a fresh taste of Sondre Lerche’s poetic and playful narrative voice and Victoria Sandøy’s delightful illustrations.

A Fly Flew is a funny, ingenious story for children aged 3 to 6. 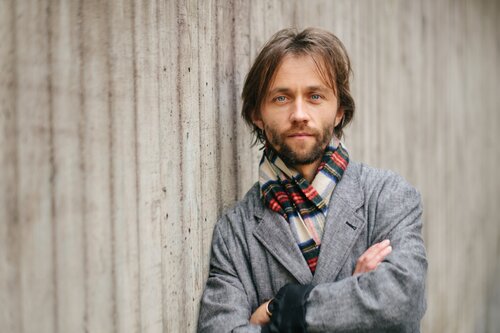 Sondre Lerche (b. 1982) made his musical debut in 2001, with the album Faces Down. Since then, he has released numerous critically acclaimed records with a broad appeal, inspired by genres such as jazz, rock and club music. The great shift in Lerche's discography, however, occurred with his two latest records, Please (2014) and Pleasure (2017), marked by a will to explore, with his dancing shoes on.

Since 2012, Lerche has also written regularily about music in Norwegian daily newspapers Dagbladet and Klassekampen, and for American Talkhouse.