Wild stuff
about animals and nature and things

Wild Stuff is a fantastic new nature book from the dynamic duo, Ole
Mathismoen and Jenny Jordahl. In a fun and easy to understand way they show us a world worth fighting for.

The book collects several current full-page comic strips from Aftenposten Junior, this time featuring strips with animal and nature themes – and even more humor. In addition, you will find a lot of new and exciting factual
material, new series and fantastic new multi-image spreads of “seek and find” where you will want to embark on a journey of discovery – again and again.
This is another sequel to the Brage Award nominated Green Stuff – Nature and environment and things. 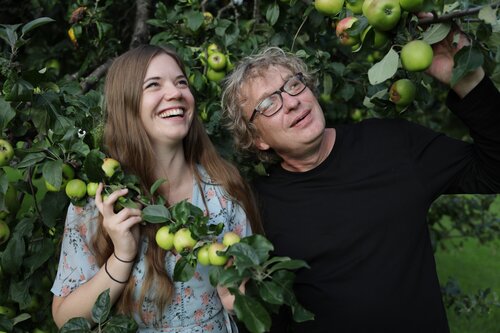 Ole Mathismoen (b. 1961) is Norway’s foremost environmental and climate journalist, who has written several books on environmental protection. Green Stuff Nature and environment and things (2018) was nominated for the Brage Award. What’s with the climate?
was nominated for The Ministry of Culture’s Non-Fiction Literature prize. He has also received the Bergesen Award.
Jenny Jordahl (born 1989) is an illustrator, cartoonist, graphic designer, blogger and author with a wide range of publications to her credit. The award-winning books Green Stuff Nature and the Environment and things and What's with the climate? are in collaboration with Ole
Mathismoen.

Green stuff - Nature and environment and stuff
What's the deal with the climate?