The saddest dog of the year in this year's funniest illustrated book.
Ulf wakes up one morning feeling rather poorly. But he can’t quite put his finger on what is wrong. He goes to the doctor and the diagnosis is surprising: Ulf is dead. This is both sad and quite awkward, Ulf thinks. It becomes particularly unfortunate when no one is aware of it. Ulf therefore decides to hold a funeral. During the funeral there is a knock on the door and the doctor
arrives with surprising news. 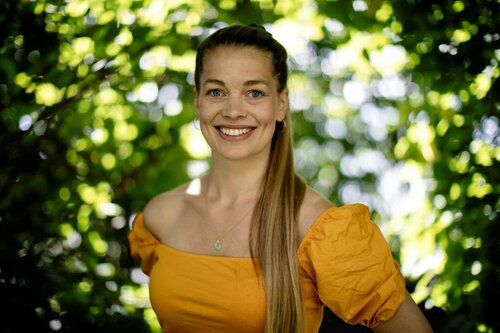 Rebecca Wexelsen (b. 1986) made her debut with the collection of poems Så faller jeg (So I fall), at Tiden Norsk Forlag in 2017. In 2019 she debuted with the novel Hotel Montebello. This is her debut as a picture book writer.
Camilla Kuhn (b. 1975) made her debut as a writer and illustrator in 2007. Since then, she has a long list of books to her credit, a number of which have been translated into several languages. In 2015 literary critic Guri Fjeldberg named Kuhn as one of the big four amongst today’s children’s book authors in Norway.