Ragnar Aalbu
Down the Tubes

It had to come: A book about carelessness in the transport industry. Down the Tubes is the third and final book in Ragnar Aalbus' critically acclaimed trilogy that began with Knock on Wood and continued with Pie Noon.
This time we meet brothers Ellefsen and Tollefsen, who run a transport company. They specialise in transporting especially long items, such as pipes and tubes. Mostly just tubes. While out on a delivery they make a sharp turn and manage to demolish an entire bird village. The birds are, understandably enough, furious. The owl orders a full scale attack, and our friends find themselves on a desperate flight through the forest. At last they find
shelter in the cave of the mole, which offers them raisin buns. Will the brothers be able to make peace with the birds and rebuild their houses? We can reveal that there is indeed a happy ending – of sorts. 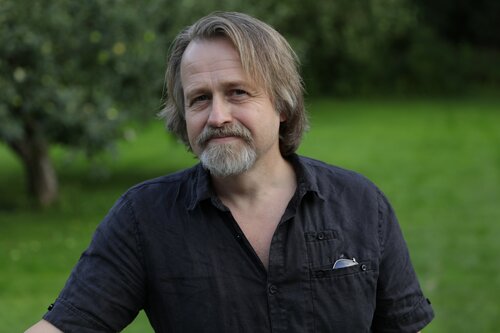 Ragnar Aalbu (b. 1966) is a picture book author and illustrator. He has been nominated for the Nordic Councl’s Children and Youth Literature Prize and has received The Most Beautiful Books of the Year and Visual awards. He received the Ministry of Culture’s Literary Award for Children and YA literature three times,in addition to three nominations.