Molly and her best friend Sofie spend their days building out their treehouse and making comic books – but now that the summer holidays are over, something has changed. All the girls in the class have started playing football, and Sofie is the team’s star player. Meanwhile, Molly can’t even get her head on the ball.
Molly wants to quit football, but her parents won’t let her. Then some girl skaters make an appearance, forcing Molly to make some difficult choices.

Girlskate deals with friendship, wanting to fit in, and the importance of doing your own thing.

Steffen Sørum and Eldrid Johansen have written a number of books for children and teenagers, both together and in their own right. The book is illustrated by Ingrid dos Santos. All three are active skateboarders. 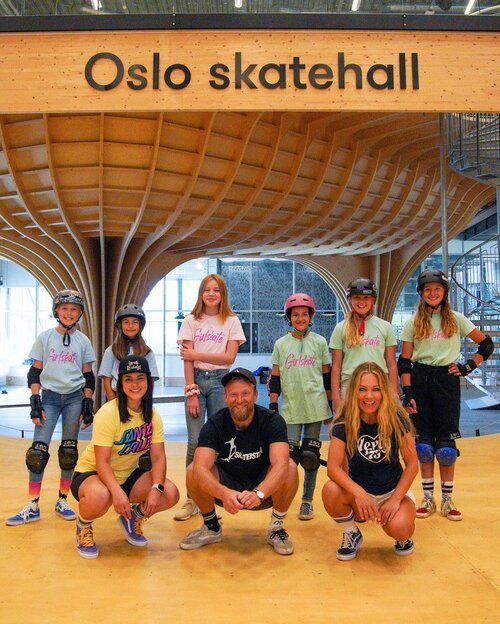 Steffen R. M. Sørum (b. 1976) has published a range of books for adults, teenagers and children. His debut novel, You Love Me, was released in 2000. In 2016 he was awarded the Ministry of Culture’s prize for his book Write Brilliantly, written with Eldrid Johansen and Ingrid dos Santos. Steffen trains children’s authors at the Norwegian Institute for Children’s Books. When he has time he tries to skateboard, play games, and read.

Eldrid Johansen (b. 1973) has published many books for children and teenagers since she made her debut with "Sara Wants to be a Star" in 2005. Eldrid also works as a singer, singing actress, and producer of literature for the Cultural Schoolbag, Eldrid is a keen skater and became Norwegian vert skateboarding champion in 2019

Ingrid dos Santos (b.1984) has illustrated a number of books for children and young adults. The activities she enjoys best require some form of kneepad and a helmet, and she bears her bruises as badges of pride.