T. Parvela and B. Sortland 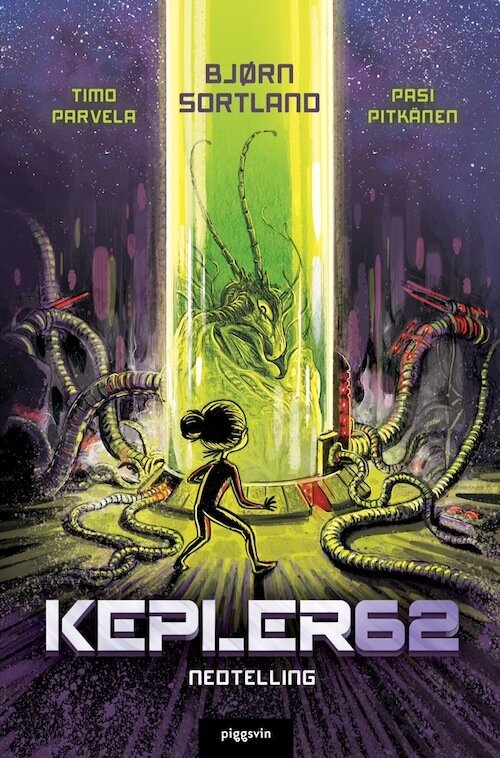 KEPLER62 is a new children’s book series created by three popular names, one of them is Norwegian Bjørn Sortland.

The Earth’s natural resources are running out, and the Global Government has decided to send a group of kids on a journey to investigate an Earth-like planet that might be capable of supporting life. In order to be eligible for the mission, kids have to complete all levels of a videogame called Kepler-62. The players are selected for a training camp and then the journey to the planet Kepler-62 can begin. But not everything is as it seems…

This six-part space adventure takes readers on an exciting journey through outer space. The young voyagers become settlers when they reach Kepler-62e, and they are faced with difficult choices. They encounter alien beings, illness and finally the truth behind the lies.

Call (Kutsu, WSOY 2015) was shortlisted for the Arvid Lydecken Prize 2015. Countdown was nominated for the ARK Children's Book Prize 2015, and for Barnas Bokpris 2016 in Bergen Library.

T. Parvela and B. Sortland

Authors Timo Parvela from Finland and Bjørn Sortland from Norway, together with Finnish illustrator Pasi Pitkänen, have created a fascinating world where friendships are put in the balance in the unexplored reaches of outer space. These books are being published simultaneously in Finland and Norway.

Bjørn Sortland (b. 1968) is an award-winning Norwegian author whose many works include picture books as well as children’s and YA novels. His books have been translated into more than 20 languages. Sortland’s writing is suffused with humour, while his books also take the problems typically encountered by children and young people seriously.