Camara Lundestad Joof
I talk about it all the time

I talk about it all the time is a testimony, an appeal and a self-examination. Camara Lundestad Joof was born in Norway, with a Norwegian mother and a Gambian father. The book depicts how the racism she constantly experiences, infects her days and controls her thoughts.

I call one of my girlfriends.
Did the man in the bar call me a coon when I didn’t want to give him my number? That time we had agreed to drink beer, but we ended up drinking tequila instead?
She becomes quiet.
No. He called you a nigger.
Thank you, I say. Thank you so much for remembering.

She ransacks her memory. What if she misremembers something? How can someone believe her then? How many details does one have to remember in order to appear credible? Does she believe herself? And can anyone ever free themselves from the question of skin colour?
The book is now in it’s fifth print run.

'I talk about it all the time' speaks straight to my heart. It tears and shudders my skin and stirs my emotions.

Impressively, she brings out the complexity and nuances in her experiences...Expressed and visible racism is easy to be against, instead Joof often focuses on the small comments, the neglect and the silence. It’s a very strong read and an impressive debut! 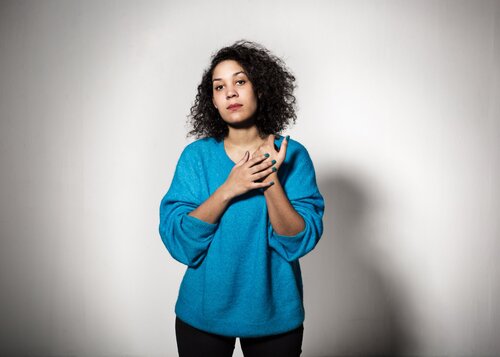 Camara Lundestad Joof (1988) is a Norwegian-Gambian documentary performance artist, playwright and author.
She’s currently a house playwright at Dramatikkens Hus (The Norwegian Centre for New Playwriting ) and in june 2108 she released her first book I talk about it all the time. The past twelve years she has worked as a political and artistic adviser for art institutions, organizations and governments in Norway and The Nordics.