A colourful and imaginative bedtime tale

Daddy says it’s bedtime, but his little girl wants them to carry on reading. Just one more book before she goes to sleep! She wishes that someone would write a book about her for once. Up on the bookcase there isn’t a single story about her!
They patch together a book about the girl. Will there be a slime monster in the book? Perhaps she will climb up the world’s tallest mountain? Maybe she will travel backwards in time to meet her Grandpa? Or go into the future to meet herself as a grown-up?
Anything is possible in a story. But if everything is possible, then scary things can happen, too. And what happens when Daddy gets so excited thinking up stories that he himself forgets it’s bedtime?

'The pages are filled with details that invite multiple read-throughs and a wealth of rich, harmonious colours.'

'Both verbally and visually, Bedtime is a heartwarming, fun-filled story about creating magic together, and about spending time in close company.' 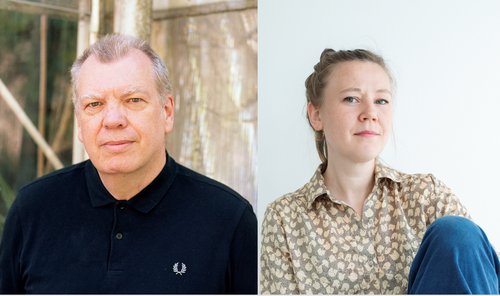 Frode Grytten (b. 1960) is one of Norway’s most prominent contemporary authors. He had his literary debut in 1983 with the poetry collection, Start. His 1999 work, Bikubesong, was awarded the Brage prize and nominated for the Nordic Council Literature Prize. He has written a long line of novels and short story collections, and has also been awarded with a number of literary prizes. In 2008 he published the children’s book, Gabba gabba hey, which was illustrated by Gry Moursund.

Mari Kanstad Johnsen (b. 1981) is a visual artist, children’s author and illustrator, who received her education from Oslo’s College of Art and in Stockholm. She was nominated for the renowned Brage Prize for her picture books ABC (2017) and 3 2 1 (2019).