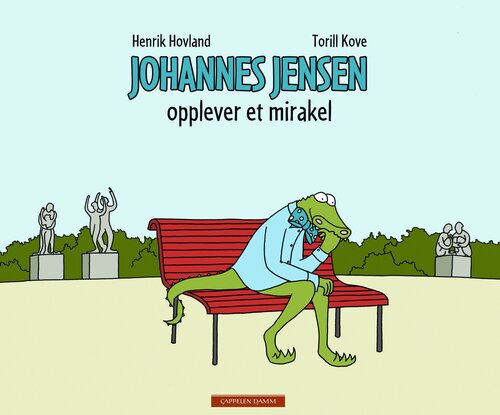 Johannes Jensen knows that Frida has a secret. But she won’t tell him what it is. Eventually he understands that the secret is in Frida’s belly. She’s going to have a baby.

Johannes keeps thinking about it. While he sits on his bench in Frogner Park, Dr. Fjeld happens to come by. And together they discover what Johannes Jensen has to do to be a good father.

This is the third book about Johannes Jensen.

Torill Kove’s illustrations are packed with things that children can discover on their own, and that grown-ups can enjoy. They sneak themselves in between Henrik Hovland’s texts to create a charming, though somewhat gloomy, whole.

TORILL KOVE (b.1958) has illustrated the Johannes Jensen books and has published two of her own children’s books—one of which, Den danske dikteren (The Danish Poet) was the basis for the Oscar-winning animated film (2007) of the same name.