Trees I have known 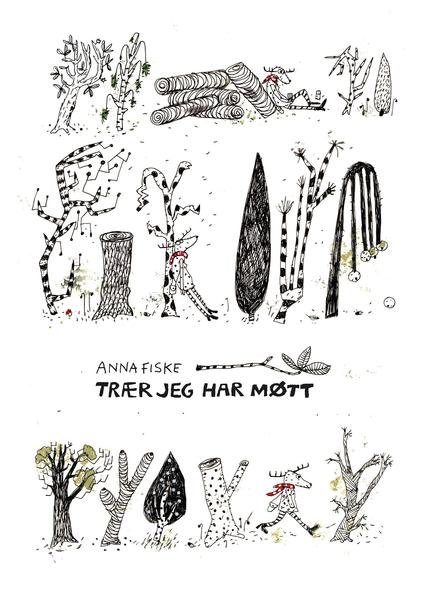 The chestnut tree in the courtyard: tall, hard, proud; the birch tree with long swinging arms, the weeping willow, and the tree with a trunk black as coal – these are some of the trees in Anna Fiske's life. And then there are all the pine trees: in the childhood garden, by the sea where they are shaped by salty breeze, in the mountains, in the garden in the new country – it’s important to always have a pine tree in one’s life.

In this picture book for adult readers' enchanting interaction between
memories in drawings and in poetical texts, Anna Fiske has created her own genre.

The protagonist is drawn as a moose wandering through a wood of remembrance, with a near blissful smile and an expression of trust in the universe… the expression conveys the core of Anna Fiske’s artistry – openness, understanding, and the ability to articulate nuances where others see clichés.

Anna Fiske’s "Trees I have Known" is a beautiful, marvelling, and poetic book of
remembrance that stands out in the field of art books

Anna Fiske (b. 1964) is a swedish-born writer, illustrator, and cartoonist living and working in Norway. Fiske has a distinct and unique style, both in her literary and pictorial expression, and has been widely recognised for her work, winning several awards and residences. Fiske published a groundbreaking ad-free reoccurring children's cartoon Rabbel (2005-2009), receiving her first prize as a cartoonist from the Ministry of Culture for her contribution. Fiske has since been the recipient an astonishing number of awards, including another two from the Ministry of Culture, illustrations (2015) and again as cartoonist (2017), and Bokkunstprisen (2014), to name a few. She was also awarded a literary residency through the prestigious Rasmus Løland Litteraturstipend (2014)